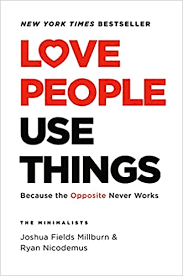 I often don't have time to read many books fully from cover to cover these days. But one book that I just wrapped up (that I started reading back in August!), titled, Love People, Use Things: Because the Opposite Never Works, has had a profound impact on my life. I highly recommend it to others.

Written by childhood friends and business partners Joshua Fields Millburn and Ryan Nicodemus, whom, as a pair, are known as The Minimalists, I bought the book from my local Target store for reading material on my flights to and from Key West this past August. The book had just recently come out a month earlier, back in mid-July 2021. The Minimalists had written a few books before this one, which I have yet to explore. What prompted me to pick this one up, though, was discovering their 2016 documentary, Minimalism: A Documentary About the Important Things, on Netflix. A few days ago, I just watched their most recent film (2021), also available on Netflix, titled, The Minimalists: Less Is Now. I highly recommend both of these documentaries. Very powerful and moving.

In Love People, Use Things, the duo reflect on how reducing all the clutter and noise in our lives - all the junk gathering dust in our closets, basements, and storage units; all the clothes we never seem to get around to wearing; the long hours we're putting in at work and the mounds of debt we're accumulating just to keep up appearances and look "successful" to all our friends, co-workers, neighbors, and even our own family members (The "keeping up with the Joneses" mentality), etc., etc. - can help us live more fulfilling, meaningful, productive lives. By committing to a simpler lifestyle and only holding onto the possessions that truly bring us joy or add value to our lives, we are free to devote more of our energy, time, talents, and other resources to the things that really do matter in life - to hobbies and creative endeavors that bring us joy; to the relationships in our lives; to giving back to others; to making memories through unforgettable experiences. Consuming less liberates us to be able to create more.

The pair reminisce on how they spent their 20s climbing the corporate ladder - at the same company but in different roles and departments - while raking in the dough and owning anything and everything they wanted, only to arrive at the realization that they weren't happy. Both of them grew up poor and in not the best of home/family circumstances, and this is what gave them the drive to push harder and harder for "success." In the end, though, it was all in vain. All they ended up with was the accumulation of stuff, massive credit card debt from acquiring said stuff, and a feeling of emptiness. As Millburn describes it, he was living the American Dream, but it wasn't his dream. In the same month, Millburn lost both his mom (to cancer) and his marriage. It was then that he realized something had to change. He was the first of the duo to stumble upon the philosophy of minimalism, and would later introduce it to childhood friend Nicodemus. Nicodemus noticed his longtime pal seemed happier, and so he took him out to lunch one day at a Subway to get the scoop. The rest, as they say, is history.

You can learn more about Joshua Fields Millburn and Ryan Nicodemus, The Minimalists, at this Wikipedia page dedicated to them. Check out their main website and explore their blog, podcast, and other creative works at TheMinimalists.com.