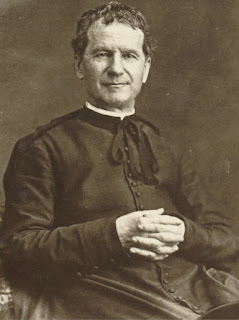 Today, January 31, is the feast in the Roman Catholic Church of St. John Bosco, popularly known as Don Bosco ("Don" is a title given to priests in Italy).

Don Bosco, who lived from 1815-1888, was both beatified and canonized by Pope Pius XI. He devoted his life's work to taking care of disadvantaged youth, including homeless children and juvenile delinquents. His work included feeding and educating children, providing the sacraments of the Church and character development, and training boys and young men for work in the trades.

He was also a prolific writer, with works ranging from the history of the Roman Empire to Church history and math textbooks. One of his many works was a brief biography he wrote about one of his youngsters, St. Dominic Savio (1842-1857). Sadly, Dominic died at age 14. He was a devoted Roman Catholic, firm in his faith, and the biography Don Bosco wrote of him played a role in Dominic's own canonization as a saint. Don Bosco's own mentor, Father Joseph Cafasso, was also declared a saint.

No matter your faith, I think Don Bosco is a true inspiration for us all. For me, now working in my fourth school year since making the conscious choice to transition to the field of education after holding various roles in business and industry over the years, Don Bosco is the perfect example of a strong male role model and solid moral voice. Sadly, in this troubling age of social media, consumerism and its demand for instant gratification, and sound bites rather than real conversations, we need many, many more men like Don Bosco. And they don't need to be priests to make a genuine difference in the lives of children and young adults.

You can read more about the life and times of St. John Bosco, also known as Don Bosco, by checking out this Wikipedia page devoted to him. Here is another wonderful biography of Don Bosco from the Salesians of Don Bosco in the United States (USA West Province) website. Finally, here is an extensive biography you can download for free as a PDF e-book.