Part of our occasional series, Interesting but useless trivia. Trivia that is certainly interesting, but yeah, pretty useless in the grand scheme of things. Not likely to result in a promotion, raise, or your next big career move.

Cy Young (Born Denton True Young, 1867-1955) was a major league pitcher from 1890-1911. He played for five teams in his 22-season career. A prestigious award is named in his honor that is given to one American League and one National League pitcher each year. Cy Young has the most wins (511) and the most losses (316) in major league history. Neither is close to ever being beaten. https://en.wikipedia.org/wiki/Cy_Young

Satchel Paige (Born Leroy Robert Paige, 1906-1982) made major league history when he became the oldest rookie in 1948 at the age of 42. He made his debut with the Cleveland Indians that season. But Satchel was far from a rookie. He was already a legend in the old Negro leagues, pitching for various teams since the mid-1920s, and had already faced a number of major league hitting stars in unofficial exhibition games across the country.

Also in 1948, Paige became the first Negro leagues player to pitch in a major league World Series. He retired in 1965 with the then-Kansas City Athletics - at the age of 59. https://en.wikipedia.org/wiki/Satchel_Paige

The most expensive baseball card in existence is the 1909-1911 T206 Honus Wagner card. In the late 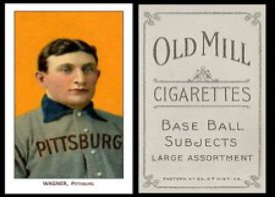 1800s-early 1900s, baseball cards were largely manufactured by tobacco companies. Back then, cards did not feature the player’s stats. Rather, the backs usually had an advertisement - tobacco, candy, department stores (Boston Store came out with a set of cards in 1917), etc. Wagner, a Hall of Fame shortstop with the Pittsburgh Pirates, is said to have strongly objected to his likeness being affiliated with tobacco. As a result, his card was pulled from production, but not before a small number (50-200 estimated) made it to the public. Authentic copies can range anywhere from hundreds of thousands of dollars to nearly $3M, depending on condition.
https://en.wikipedia.org/wiki/T206_Honus_Wagner

Finally, for Brewers fans everywhere - long before the Milwaukee Brewers we have come to know and love, there was a minor league team also called the Milwaukee Brewers. That team existed from 1902-1952, and played in the then-American Association at Borchert Field on the city’s north side. https://en.wikipedia.org/wiki/Milwaukee_Brewers_(American_Association)
Posted by Staff at 6:30 AM