Myles Keogh and the Battle of the Little Bighorn in 1876

An Irish warrior that fought for the Pope in Italy and then came to the United States to fight for the Union in the Civil War (1861-65), including at Gettysburg. Met his death at just 36 years old fighting Sioux and Cheyenne warriors in Montana at what became famously known as Custer's Last Stand, and then had his remains shipped to New York for burial. Here's his incredible story. 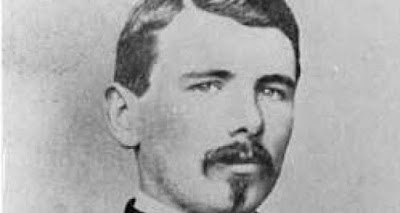 Growing up as a kid, I was quite the history buff. Even though I was on my way to eventually becoming a total slacker in high school, something I don't recommend, I loved to learn as much as I could about a variety of historical eras and events. I loved to play baseball in the street or at the park with my friends, and I played little league for several years (I didn't play high school sports because, again, I was a slacker). But just as much as I loved to play the game, I loved to learn all I could about the history of the game. I was particularly fascinated by the 1900s-1910s era. I loved the designs and artwork of the baseball cards and advertisements from that period. I knew all about the lives and careers of legends like Christy Mathewson, Honus Wagner, Ty Cobb, Walter Johnson, Cy Young, Eddie Plank, and my personal favorite because of his wild and unpredictable behavior - Rube Waddell.

For a period of time, I was fascinated with World War II history, and I had a strong interest in the aircraft used in the war - the various bombers and fighters. I wrote on this blog that I recently rediscovered a documentary from 1944 about the amazing accomplishments of the crew of the Memphis Belle, a B-17 bomber that flew bombing missions over Germany from its base in England. I included the full documentary and several clips from a 1990 Hollywood movie about the crew in that post, which you can check out here.

And then there was the period in 2nd-3rd grade where I learned all I could about both the Revolutionary and Civil wars, prompted by seeing my dad's 1976 high school yearbook, the year he graduated. To commemorate the 200th anniversary of American independence, the yearbook featured a section showcasing all the major flags flown in or by the country - flags of individual colonies prior to and during the Revolution; the Confederate flag and its major variants; various battle flags used over the centuries; state flags; and a series of official U.S. flags that showed its evolution leading up to what we now know as its current design.

Finally, getting to the main topic of this post, there was also a period growing up where I learned all I could about what's generally and collectively referred to as the Indian Wars - the various battles and skirmishes that took place out West between the U.S. Army's Cavalry and various Native American tribes after the Civil War. This interest all began when my parents, sister, and myself headed out West on a road trip one summer. I forget how old I was at the time, but I would have been in middle school. We visited Mt. Rushmore and the Crazy Horse Memorial in South Dakota; stopped at multiple roadside markers pointing out U.S. - Indian battle sites; ventured into Wyoming for a couple of days; and went into Yellowstone National Park, albeit very briefly due to lack of time. But the highlight of the trip for me was our visit to the Little Bighorn Battlefield National Monument in Montana, site of the June 25-26, 1876 battle and home to a national cemetery for veterans of all wars.

I remember the site being very quiet. It was very peaceful and solemn. It was the perfect place for thinking; for reflecting and just letting your mind wander. Had it not been for all the markers and fences indicating where soldiers and Native warriors had fallen, you wouldn't know that a bloody massacre had taken place there some 120 years (at the time I went there) prior. It was that quiet. I'd love to visit there again someday.

Recently, I rekindled my interest in the battle and in that historical period in general. But I came across a "new" character - Myles Keogh, a captain in the battle. Keogh led the men of the U.S. 7th Cavalry's Company I. Now, if I heard of Keogh's name so many years ago, it didn't stick with me. See, as a kid, I remember learning all about the roles of Captain Frederick Benteen (who led companies H, D, and K); Major Marcus Reno (who led companies A, G, and M); and of course, Lt. Col. George Custer, the famed "boy general" of the Civil War, so named because he was made a general at the age of 23. They were certainly the bigger names in the battle on the U.S. side, and a lot has been written about them. Benteen and Reno survived the battle, and Reno went on to face accusations of being a coward for many years after, including by Custer's wife, Elizabeth. Custer, of course, along with all the men he directly commanded in the battle, fell to their deaths. Well, Keogh, it turns out, met the same fate.

As I recently started to learn about Myles Keogh and his brief yet extraordinary military career, I thought to myself simply, "Wow..." Here's a man that met his death at the young age of 36 - my age as I write this - and had, in his short career, left Ireland to fight for Pope Pius IX in defense of the Papal States during the [re]unification of Italy; came to the United States to fight for the Union during the Civil War, surviving major battles like Gettysburg, to name just one; headed out West afterward to participate in the Indian Wars; fights and dies bravely in perhaps the most fabled battle in U.S. history; and then has his remains shipped back to New York for burial.

It's said that Keogh's body was found stripped of its clothing, but not mutilated, as many fallen soldiers were. There are a couple of theories surrounding this. A devout Roman Catholic, Keogh wore an Agnus Dei (that's Latin for "Lamb of God") on a chain around his neck, and the Indian warriors may have viewed this as powerful "medicine." Another theory, tying into this one, holds that many of the Indian fighters were simply Catholic themselves.

Keogh's horse, Comanche, though badly wounded in the battle, survived and would go on to live another 15 years, dying in 1891. He became a mascot of sorts for the 7th Cavalry after the battle, and he is currently housed at the University of Kansas Natural History Museum. He is stuffed and in a humidity-controlled glass case.

Read all about Keogh's extraordinary life and career in this Wikipedia article, and check out the two videos immediately below pulled from YouTube. The third video, also from YouTube, is a news clip from 2015 talking about the battle in general and visiting the site.

Recently, I had the opportunity to see again a documentary released in 1944 that showcased the Memphis Belle and its crew. The Memphis Belle was a B-17 Flying Fortress, a four-engine heavy bomber produced by The Boeing Company. These B-17 bombers saw heavy action throughout World War II. Many of them, like the Memphis Belle, were stationed over in England, from where they would conduct daytime bombing raids over Germany.

The documentary is currently available through Netflix, and that's where I was recently reintroduced to it. Growing up as a kid, I was fascinated by various World War II - era bombers and fighters, so I had seen this documentary a number of times as a kid.

In a nutshell, the crew of the Memphis Belle became the first to complete its mandatory 25 bombing missions. When a crew completed 25 missions, they could go home. Sadly, so many didn't come close to that mark, shot down by German fighters and heavy anti-aircraft guns on the ground. The crew of the Belle was truly lucky and fortunate to accomplish what it did. The odds of getting to go home, for any crew, were slim to none.

1990 saw the release of a major motion picture film called Memphis Belle. As with many Hollywood films, the story was heavily dramatized for effect. In reality, the crew and plane made it back to base virtually unscratched. Nonetheless, what you'll see depicted in the movie really did happen to so many crews - to so many lives and families - and we must not forget that. The horrors of war are real, and the movie shows what really happened up there in the sky virtually every day of the war.

Following is the documentary in its entirety. It runs around 40 minutes. I've also included several clips from the 1990 Hollywood film.

In the documentary, pay close attention to the artwork on the side of the planes as they take off on their mission. Many of these planes had names, and featured ornate painted images to go along with those names. For example, the Memphis Belle was named so by its pilot. - he had a girlfriend in Memphis. There's another plane called Dame Satan, featuring a blonde woman dressed as the devil. A couple of the planes featured Hitler in insulting or scared poses. And then there's Old Bill, which featured a friendly-looking, bearded, Paul Bunyan - type of guy. At the end, you'll also see England's King George VI and his wife Queen Elizabeth The Queen Mother greeting the crew. They are the parents of the current monarch, Queen Elizabeth II. On a side note, one of the Memphis Belle's crew members, you'll hear, is from Green Bay, Wisconsin!

Here's a Wikipedia article on the Boeing B-17 Flying Fortress.

Email ThisBlogThis!Share to TwitterShare to FacebookShare to Pinterest
Labels: B-17 Flying Fortress, Boeing Company, History, Memphis Belle, Research paper ideas, World War II history
Newer Posts Older Posts Home
Subscribe to: Posts (Atom)
Your donation in any amount is sincerely appreciated. It helps cover time and research, along with a variety of marketing expenses. Thank you for your consideration and support, and we hope you're finding this blog to be of some value to you.